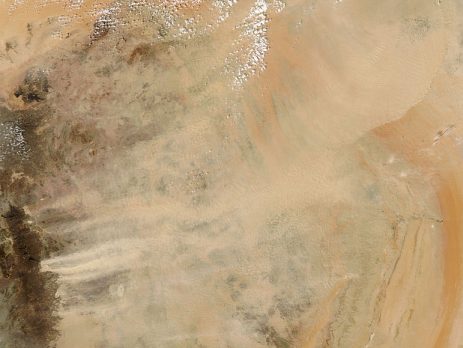 In the autobiographical novel The Cairo House, the Egyptian-American author Samia Serageldin recalls her desire for the world outside Egypt, “a world in which you did not constantly lose the battle against dust and baksheesh.” In another work, Out of Egypt, André Aciman also expresses disgust with post-1952 Egypt, where “there are too many vagrants, too much dust, so few Europeans.” Indeed, dust has become a key component in the contrast between the Oriental city and the modern European city, that urban space that le Corbusier imagined as open, sterile, and, mainly, dust-free. The sources of this dichotomous view of the world, which typifies both Arab and Western thinkers, can be found in Egypt even before the Modern Era: In the Egyptian historian Abd al-Rahman al-Jabarti’s description of the 1798 Napoleonic invasion of the Middle East, the local dust appears as a force that is mobilized and that participates in the combat against the invaders. The climatic conditions in the Mediterranean basin have indeed made Egypt and its neighbors into a crossroads that have drawn to it dust from Europe and the Sahara. However, since the Napoleonic invasion, the reasons for the rise of dust in the region have changed, as have its composition and effects. The exclusive identification of dust with the Orient, and the blurring of the role of the modern, industrialized West in the history of the creation of dust and its harmful effects, conceal a world whose various parts are in fact interconnected. 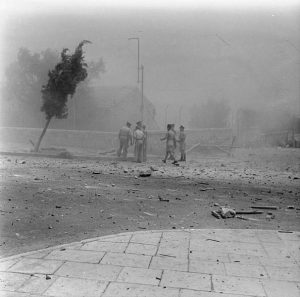 In the nineteenth century, and even more so in the twentieth century, the composition of dust in our region has changed greatly. In the beginning of the period, urban dust in the region’s cities consisted of organic substances, mainly from animal and human excretions that had dried, had become mixed with sand, and were carried in the air. But toward the end of the period, more and more of the urban dust was the product of industrial processes, the exhaust of motorized vehicles, and other substances, some of them carcinogenic. Historic processes such as urbanization and war left their mark on the dust in the region, even after it seemed to have settled. For example, Prof. Roger Owen’s article, which appeared here and dealt with the growth of the informal sector in Cairo in the second half of the twentieth century, could have been written as part of an analysis of Cairo’s dust. Cheap construction methods, mainly based on red mud bricks, dried quickly in polluting fires, are one of the chief producers of the city’s dust. Another component is the dream of the private car that former president Sadat introduced from the United States, building highways, dismantling the infrastructure of public transportation, and increasing the reliance on Saudi oil.

Such reliance on fossil fuels (coal, oil, and natural gas)—in Western Europe and in North America since the beginning of the nineteenth century and in our region since the middle of the twentieth century—has been recognized as the main cause of global warming. Since the beginning of the previous century, a large part of these fuels have been produced in the Middle East but are consumed mainly in the United States and Europe, both in industrial processes and as the result of increased use (the ingredients of a typical American salad are transported thousands of miles on average from field to table and leave behind a long, polluting carbon footprint). The climatic ramifications of these processes and of the blind lust for cheap and unlimited energy are distributed inequitably. Whereas the wealthy nations are responsible for the majority of greenhouse gas emissions, the poor countries, agricultural and developing, are more exposed to the harm caused by global warming.

The most recent dust storm is a good example. For about a decade, Syria has been struck by one of the severest droughts in its history. The drought began in 2006, damaging more than 60 percent of the country’s cultivated land, and especially rain-dependent crops, such as wheat and cotton, as well as livestock. Researchers who have mapped historical weather patterns have drawn a direct connection between extreme drought and global warming. We must also consider the failed management of the water sector by Bashar el-Assad’s regime. Until the end of the first decade of the twenty-first century, failed crops caused one million and a half Syrian farmers to leave their lands and move to the urban centers that were already populated by Palestinian and Iraqi refugees. The southern city of Daraa was one such center, in the heart of a disaster-stricken  agricultural area. That was the site of the initial uprising that turned into a civil war, an uprising driven by the rise in the cost of bread, a population explosion, and brutal suppression by the regime. 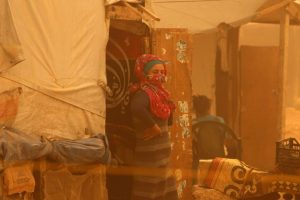 The war, in turn, exacerbated the agricultural crisis and the accompanying desertification. As in other periods in the region’s history—for example, during World War One and the decade following it—in this case, too, desertification appears to be the result of a rise in temperatures, a decrease in rainfall, and a change in the patterns of land use. Without regular irrigation, fertilization, pest control, and crop cycles that stabilize the soil, agricultural soil becomes floating dust. Last week the wind carried it to us, along with reports of the stream of Syrian refugees knocking on the gates of Europe, after neighboring countries have collapsed under the burden (for example, Jordan, Turkey, and Lebanon, where the stream of refugees has generated an infrastructure emergency and sharp political protest), and while some countries— the Gulf countries and Israel—continue to ignore the crisis and are even fanning the flames of war with money, arms, or diplomatic involvement.

As the dust settles we can draw at least three conclusions from its visit here. First, in practical terms, it is impossible to ignore the link between the sated, sterile, and purportedly enlightened West and the refugees bearing on their shoulders the global damage the West has caused; nor can we ignore it morally. Second, the desire to extract and buy polluting fossil fuels at rock-bottom prices—which characterizes precisely the pseudo-progressive discourse in Israel about the new reserves of natural gas—is a recipe for disaster. And finally, as the poet Adam Zagajewski has written, dust exemplifies well how “large things reside in little things / for a moment.” 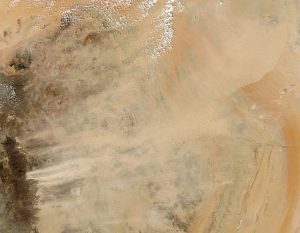